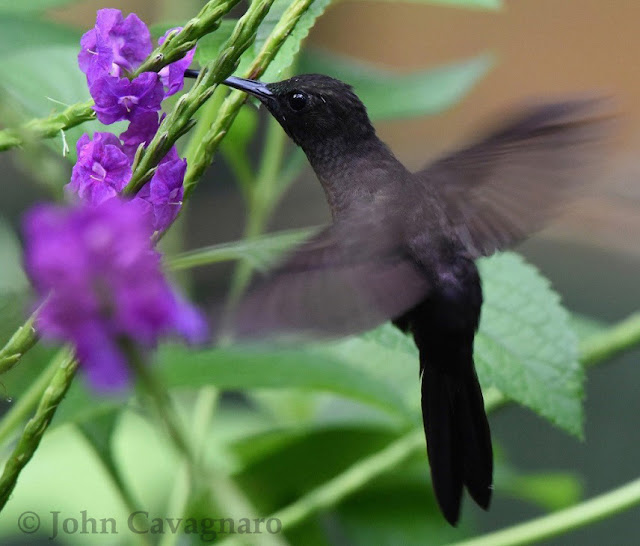 I took a trip to Costa Rica last fall as part of a tropical ecology class. One morning, while hiking through the rainforest, a small group of us saw a very interestingly colored hummingbird; it was completely black. We followed it as it was feeding and I got a few good pictures, but none of us had any idea what species it might be. When we consulted with the other birders in our group, they assured us that there is no all black hummingbird.

Knowing this, we hypothesized that this hummingbird might have been melanistic. Melanism is the overproduction of melanin, the pigment responsible for black colors in most vertebrates. The most famous example of melanism is the Black Panther; they are not a unique species, but are in fact melanistic Jaguars* (Panthera onca).

Despite the lack of color characteristics, we were determined to identify the species. The shape of the tail and the bill, in conjunction with the species range, allowed us to identify this as a Bronze-tailed Plumeleteer. They are a dark green: dark as far as hummingbirds go, but not this dark. 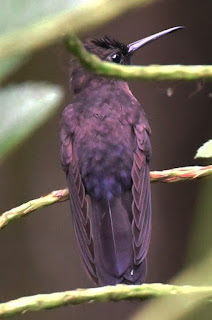 My research found very little information about melanism in hummingbirds, but Williamson’s “A Field Guide to Hummingbirds of North America” has a couple relevant notes. The author states that "melanism occurs regularly in a few tropical species," then goes on to describe melanism as "often imparting bronzy or coppery tones to normally green iridescence." You can see this bronzy coloration here, where the bird is perched on a vine.

You can find a few images online of melanism in other hummingbird species, but they generally just appear drab grey and brown. The fact that the normal coloration of the Bronze-tailed Plumeleteer is already quite dark makes melanistic individuals of this species especially striking, with entirely black plumage.

The significance of melanism in tropical species is not yet understood; one theory is that the darker colorations are more difficult to detect in the dark understory of the rainforest. Melanin content may influence feather strength as well as resistance to disease and parasites. In any case, it was very exciting to see this mutation in the wild, and I’m glad I could get a clear shot of this magnificent bird.

*At least in Central/South America. In Africa and Asia, “Black Panthers” are melanistic Leopards (Panthera pardus)

Williamson, S. 2001. A Field Guide to Hummingbirds of North America. Houghton Mifflin Harcourt, Boston.
Posted by Unknown at 1:33 AM 1 comment: