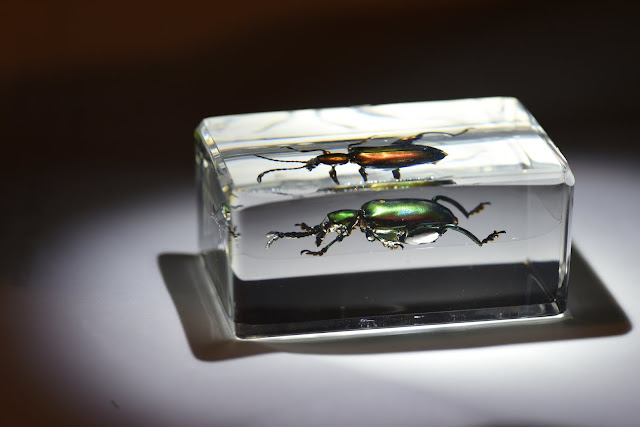 I've recently been getting into insects, mainly because of how well their coloration holds up when preserved. Here is one of my first acquisitions: a Jeweled Frog Beetle (Sagra sp.), suspended in acrylic, sold as part of a cheap variety pack on Amazon. The picture online looked pretty drab, but I know that these beetles can have some interesting metallic coloration and figured that it was worth checking out given the low price.

Two day later I had my box, and the first thing I did was shine a flashlight on my new frog beetle. And it had color! A coppery shell which melted into metallic greens and blues as I moved my flashlight around the cube. The carapace is iridescent; the colors change depending on the angle of incoming light and the viewing angle.

When you shine a light from above, the entire beetle appears reddish-bronze. When you move the light off to the side, the beetle reveals metallic greens and blues, even flashes of purple if the angle is steep enough.

Due to the refraction on the sides of the acrylic, I was able to position the beetle in such a way that both the coppery top view, and the greenish view from the side were visible at the same time, with light only coming from a single direction. It turned out that this cheap resin cube could actually enhance the viewing of this beautiful insect, by letting you see the iridescence from two angles at once.

As to the function of the beetle's colors and how they are perceived by other beetles and potential predators, we don't really know. Maybe the browns and greens of the iridescence provide good camouflage on a plant. Maybe the colors are signals to conspecifics, advertising fighting ability to females and rival males (they use their huge hind legs to wrestle). Maybe the changing color startles predators such as birds when the beetle opens its wings. Further study is needed to elucidate the function of coloration in this group.

I have been studying color in other animals (lizards) using standardized photography, but my methods aren't really suitable for this beetle. Shiny, strongly iridescent objects are difficult to measure, and this group's visual system hasn't been studied. Additionally, the resin block itself might influence the color (for example, it absorbs UV light, which can be an important component of color). Other preservation methods, like mounting under a glass frame, leave the specimen available for proper color analysis, so I don't expect to be picking up too many more insects in acrylic, but the cube serves this beetles iridescence well!
Posted by Unknown at 5:52 PM No comments: